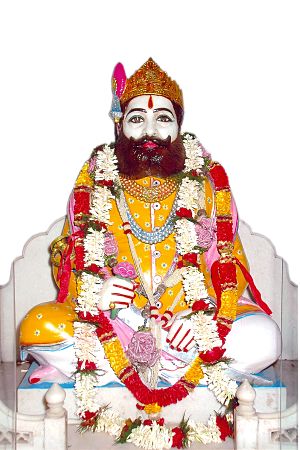 Maharaja Agrasen (or Agrasena) was a legendary Indian king of Agroha in India. This was a city of traders from whom the cities of Agrawal and Agrahari descend. He started a kingdom of traders in North India named Agroha. He is known for his compassion in refusing to slaughter animals in yajnas. The Government of India issued a postage stamp in honour of Maharaja Agresen in 1976 on the occasion of his 410th birthday.

All content from Kiddle encyclopedia articles (including the article images and facts) can be freely used under Attribution-ShareAlike license, unless stated otherwise. Cite this article:
Agrasena Facts for Kids. Kiddle Encyclopedia.