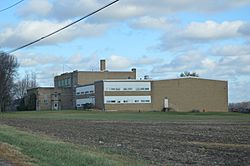 Ai is an unincorporated community in Fulton County, Ohio, United States, established around 1843. The origin of its name has been a local controversy: some say that it was named after the biblical city of Ai, while others believe that it was named after one of its founders, Ami Richards. The story continues Ami was a man, so others dropped the 'M' from his name to make the town's name more masculine. Ai has been noted for its short place name.

A post office was established at Ai in 1846, and remained in operation until it was discontinued in 1903. With the construction of the Northern Indiana Air Line railroad during the 1850s, business activity shifted to nearby Swanton and Ai's population dwindled.

All content from Kiddle encyclopedia articles (including the article images and facts) can be freely used under Attribution-ShareAlike license, unless stated otherwise. Cite this article:
Ai, Ohio Facts for Kids. Kiddle Encyclopedia.