Aipysurus apraefrontalis, commonly known as the short-nosed sea snake or Sahul reef snake, is a critically endangered species of venomous sea snake in the family Elapidae, which occurs on reefs off the northern coast of Western Australia. English herpetologist Malcolm Arthur Smith described the species in 1926 from a specimen collected on the Ashmore Reef. 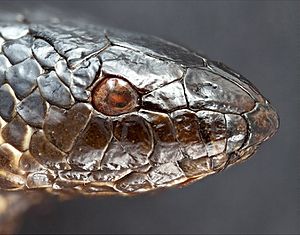 The head is distinctively small and pointed

The mainly brown, slender snakes grow up to 60 cm (24 in) long. Their head is distinctively small and pointed, and there are darker purplish-brown bands over its body. They are long-lived and slow-growing, and their age of sexual maturity is not known. They prefer water more than 10 metres (33 feet) deep, but rest during the day under coral overhangs in water less than 2 metres (6.6 feet) deep. They forage on reef flats and have strong venom which they use on their prey. It is thought that the short-nosed sea snakes mostly prey upon eels, and besides on gobies.

They breathe at the surface, and close the nostril valves during dives which may last as much as two hours. They have only one lung, which is cylindrical and almost as long as the body. Oxygen is however also absorbed through their skin, which is shed more regularly than land snakes, to rid them from attached marine organisms. They are ovoviviparous like all in their family, and the whole reproductive cycle takes place at sea. A salt excreting gland is located under the tongue.

It is found in the Ashmore and Cartier Islands and the Ningaloo Reef off the coast of Northwestern Australia. It was thought to only breed on Ashmore Reef, where it had not been recorded for fifteen years and hence was feared extinct. A 2015 study found that samples from the short-nosed sea snake, found in Exmouth Gulf, offshore from Roebourne and Broome, and from the Arafura Sea indicated that these represented distinct breeding populations, and not vagrants from elsewhere. A courting pair was observed at the Ningaloo Reef in December 2015, suggesting that a breeding population may be extant there.

Warmer sea temperatures and commercial prawn trawling activities have been highlighted as factors which may negatively impact their numbers. A fair proportion that are caught in trawler nets die from injuries or drowning. Oil spills, water contamination, dredging activities and disturbance or harm caused by increased boat traffic may be additional factors. The reason for their decline is however complex, and likely related to a decline in the whole ecosystem. Their reproduction is slow due to their small broods and high rate of juvenile mortality. Females are also unlikely to breed every year.

All content from Kiddle encyclopedia articles (including the article images and facts) can be freely used under Attribution-ShareAlike license, unless stated otherwise. Cite this article:
Aipysurus apraefrontalis Facts for Kids. Kiddle Encyclopedia.