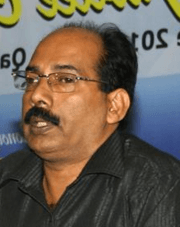 Akbar Kakkattil (7 July 1954 – 17 February 2016) was an Indian short-story writer and novelist. He was born in Kerala state. His works are known for their unique narrative style which has been seen as full of humour. His work, "Sarga Sameeksha", a creative and critical interface of a young writer with the iconic writers of the old generation is perhaps the first of its kind among Indian languages.

Kakkattil died in a hospital in Kerala from lung cancer on 17 February 2016. He was aged 62.

All content from Kiddle encyclopedia articles (including the article images and facts) can be freely used under Attribution-ShareAlike license, unless stated otherwise. Cite this article:
Akbar Kakkattil Facts for Kids. Kiddle Encyclopedia.