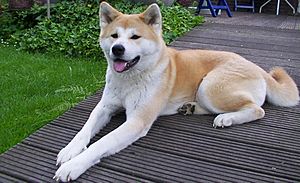 The Akita is a breed of dog from Japan. It is usually 60–70 cm high and weighs 35–50 kg. Female Akitas are 5 to 10 kg lighter. Their coat can be many colors. There are two coat types in the Akita, the standard coat length and the long coat.

Akitas originate from Akita Prefecture, in the north of Japan. The most famous Akita Hachiko was known for his unusual loyalty to his owner. To date, only the American Kennel Club, consider American and Japanese Akitas to be two varieties of the same breed. The United Kennel Club and the Japan Kennel Club consider Japanese and American Akitas as separate breeds.

All content from Kiddle encyclopedia articles (including the article images and facts) can be freely used under Attribution-ShareAlike license, unless stated otherwise. Cite this article:
Akita Inu Facts for Kids. Kiddle Encyclopedia.