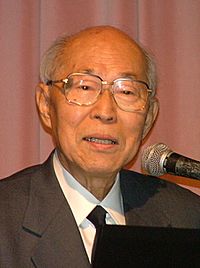 Akito Arima (有馬 朗人code: ja is deprecated , Arima Akito, September 13, 1930 – December 7, 2020) was a Japanese nuclear physicist and politician. He was known for his works in the interacting boson model. Arima was born in Osaka, Japan. He was a member of the House of Councillors between 1998 to 2004. He was a member of the Liberal Democratic Party.

All content from Kiddle encyclopedia articles (including the article images and facts) can be freely used under Attribution-ShareAlike license, unless stated otherwise. Cite this article:
Akito Arima Facts for Kids. Kiddle Encyclopedia.