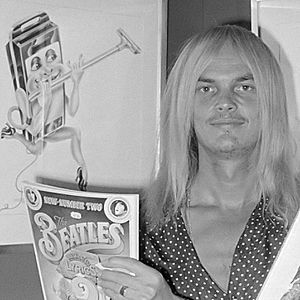 Alan Aldridge (1 June 1943 – 17 February 2017) was a British artist, graphic designer and illustrator. He was well known for his art works for musicians and bands such as The Who, The Beatles and Elton John. He also drew the cover art for the science fiction novel Make Room! Make Room! (1966) by Harry Harrison.

Aldridge was born in London. He had eight children, including Lily Aldridge.

Aldridge lived in Los Angeles, California, United States. He died on 17 February 2017, at the age of 73.

All content from Kiddle encyclopedia articles (including the article images and facts) can be freely used under Attribution-ShareAlike license, unless stated otherwise. Cite this article:
Alan Aldridge Facts for Kids. Kiddle Encyclopedia.