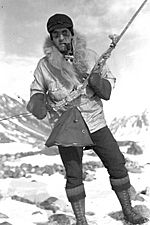 Gerry served in the United States Navy as a radioman during World War I, and was a commander in the Naval Reserve. He was living in Cornwall-on-Hudson, New York, and working as a teacher at the Storm King School, when he signed on as radio operator for the MacGregor Arctic Expedition of 1937–1938.

After the expedition, Sayre lived in Arlington County, Virginia, and worked as an instructor at the United States Naval Academy. He retired to Milton, Wisconsin, in the 1960s and died, at age 92, on September 6, 1990.

All content from Kiddle encyclopedia articles (including the article images and facts) can be freely used under Attribution-ShareAlike license, unless stated otherwise. Cite this article:
Albert Gerald Sayre Facts for Kids. Kiddle Encyclopedia.