Kids Encyclopedia Facts
This page is about the historic city in Oregon. For the present-day area of Portland, see Albina District. For other uses, see Albina. 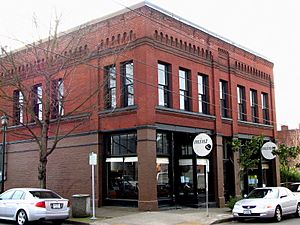 Albina is a historical American city that was consolidated into Portland, Oregon in 1891.

Albina was laid out in 1872 with a plat for the new town filed in April 1873 by Edwin Russell, William Page, and George Williams. Albina was named after Mrs. Albina Page, who was married to William Page. Settlement began in 1874 and the "City of Albina" was formally incorporated in 1887. The original dimensions of Albina were modest: from Halsey Street north to Morris Street, and from the Willamette River to Margareta Avenue (later Union Avenue, and now Martin Luther King Jr. Boulevard). In 1889, Albina annexed the land north to Killingsworth Street and east to 24th. In 1891, Albina annexed everything north to Columbia Boulevard and west to the Portsmouth area. On July 6, 1891, Portland, East Portland, and Albina were consolidated into one city.

All content from Kiddle encyclopedia articles (including the article images and facts) can be freely used under Attribution-ShareAlike license, unless stated otherwise. Cite this article:
Albina, Oregon Facts for Kids. Kiddle Encyclopedia.