The Albuquerque volcanic field is a monogenetic volcanic field in the Albuquerque Basin in New Mexico, United States. It is located about 7 miles (11 km) west of the city of Albuquerque, and is contained within the borders of Petroglyph National Monument. The field was active from 190,000 to 155,000 years ago and includes lava flows, cinder cones, and spatter cones. The oldest lava flows cover about 23 square miles (60 km2). The cones are aligned and possibly formed above two roughly north-south trending fissures. J cone (also called Vulcan) is the highest feature. Its base is made of cinder, but the crater contains a lava dome that was cut by an explosive eruption. 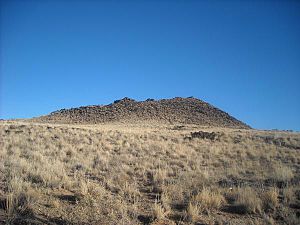 JA Volcano, as seen from its western flank, at Petroglyph National Monument in New Mexico

The largest of the cones in the Albuquerque volcanic field is Vulcan, named after the Roman god of fire. From a vantage point on top of the cone 200 feet above mesa, the alignment of the 5-mile-long chain of vents is particularly noticeable. Vulcan is a spatter cone, formed primarily by fire fountains that were active in the central vent and in smaller vents on flanks of the cone. (Spatter forms when blobs of lava are emitted from a vent, and cool as they fly through the air, and the partially molten blobs then land on the side of the cone to weld together to form a hard crust.) Fragmented cinder and spatter material and lava flows dip at angles as high as 55° away from the central vent on the eastern and southern side of the Vulcan. The spatter material is thickest on the southeastern side of Vulcan, indicating that it was blown by the wind toward the south and east during the fountaining events. A solidified lava pond that consists of a massive gray basalt with weakly developed columnar jointing occupies the crater of Vulcan. Radial, sinuous lava tubes 8 to 20 inches across and 300 feet long are preserved on the northeast and northwest flanks of Vulcan. 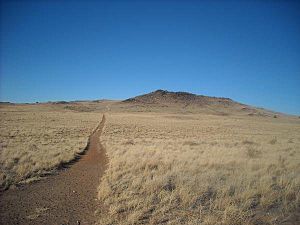 Black Volcano in Petroglyph National Monument, as seen from its south, at the trail head connecting it to JA volcano on January 14, 2009

All content from Kiddle encyclopedia articles (including the article images and facts) can be freely used under Attribution-ShareAlike license, unless stated otherwise. Cite this article:
Albuquerque volcanic field Facts for Kids. Kiddle Encyclopedia.