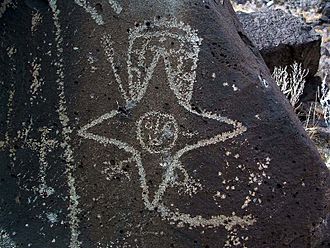 A "star person" petroglyph in the Rinconada section of PNM 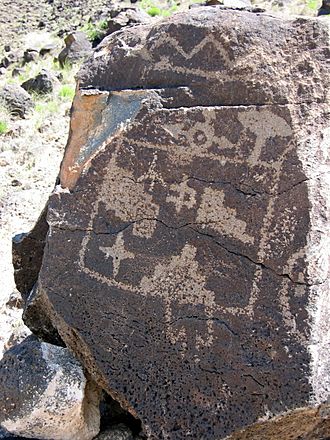 Petroglyphs on a large rock at Petroglyph National Monument

Petroglyph National Monument stretches 17 miles (27 km) along Albuquerque, New Mexico's West Mesa, a volcanic basalt escarpment that dominates the city's western horizon. Authorized June 27, 1990, the 7,236 acre (29.28 km2) monument is cooperatively managed by the National Park Service and the City of Albuquerque. The western boundary of the monument features a chain of dormant fissure volcanoes. Beginning in the northwest corner, Butte volcano is followed to its south by Bond, Vulcan, Black and JA volcanoes.

Petroglyph National Monument protects a variety of cultural and natural resources including five volcanic cones, hundreds of archeological sites and an estimated 24,000 images carved by Ancestral Pueblo peoples and early Spanish settlers. Many of the images are recognizable as animals, people, brands and crosses; others are more complex. Their meaning was, possibly, understood only by the carver. These images are the cultural heritage of a people who have long since moved into other areas and moved on through history for many reasons. The monument is intended as a protection for these lands and sites from and for visitors to see and appreciate for generations to come. The National Monument is managed in a manner that allows recreational use. The monument has four major sites that visitors can access, Boca Negra Canyon, Rinconada Canyon, Piedras Marcadas Canyon, and the Volcano Day Use trails.

Approximately 200,000 years ago, six volcanic eruptions created a 17-mile-long (27 km) cliff containing thick basalt layers of rock and cooled lava. When the volcanoes erupted, molten lava ranging in depth from 5 to 50 feet flowed downhill using old water ways, called arroyos, which eventually formed triangular, peninsula shaped channels that flowed around hills. The hills have long since eroded away over time, while the stronger basalt rocks remained, which eventually cracked and formed canyons and escarpments. As time progressed, more eruptions occurred and thicker lava cooled to form the now-extinct volcanic cones to the west of the monument; these cones can be seen from the top of the mesa. This unique formation of the landscape is called reverse topography.

The basalt rocks' geologic nature allows for the creation of the petroglyphs, or rock carvings, on their surface. The rocks contain high concentrations of iron, manganese and calcium; this combination creates rocks of a gray-like color. However, over thousands of years of exposure to the desert's rough environment, a "desert varnish" forms on the surface. The varnish is formed from the oxidization, or rusting, of the manganese and iron when mixed with oxygen in the air and water from rain; this varnish is dark, almost-black and glossy in appearance. Long ago, Native Americans, as well as Spanish settlers discovered that images can be created on the faces of the rocks by chipping away at this layer using rocks and other tools.

The petroglyph images within the monument hold deep cultural significance to Pueblo peoples and neighboring Native peoples. This rock art has complex and varied meanings.

Archaeologists have dated some carvings, primarily those in the Boca Negra Canyon area, as far back as 3,000 years ago. The relative age is determined based on the darkness of the image, its context, and its comparison to other works of the same age. It is estimated that about 90 percent of the petroglyphs were created during the period between AD 1300 until the end of the 17th century because of the "Southwestern Style" used. At this time, the Native population was increasing quickly and Pueblo adobe villages were being built along the Rio Grande River and at the base of the Sandia Mountains.

All content from Kiddle encyclopedia articles (including the article images and facts) can be freely used under Attribution-ShareAlike license, unless stated otherwise. Cite this article:
Petroglyph National Monument Facts for Kids. Kiddle Encyclopedia.