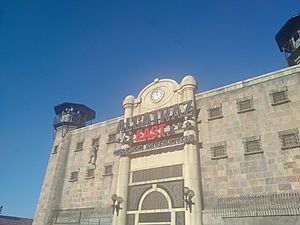 Outside of Alcatraz East Crime Museum. The building is modeled to look like a 19th-century prison.

Alcatraz East is a privately owned for-profit crime museum in Pigeon Forge, Tennessee. Opened in 2016, it was formerly operated as the National Museum of Crime & Punishment in Washington, D.C.. The museum gives a behind-the-scenes look at crime history in America. It was created and built by attorney John Morgan and chief operating officer Janine Vaccarello.

The historical area of the museum displays how crimes were committed, cases were solved, and how jury members came to an agreement on final sentencing. Anecdotes and facts about the background and behaviors of infamous prisoners are also a part of the museum. 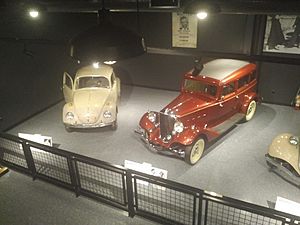 There are 20 different exhibit areas to explore that cover five themes; the history of American crime, the consequences of crime, crime scene investigation, crime fighting, and pop culture. Authentic pieces used as evidence in well-known criminal cases, and interactive exhibits and activities, are on display. A CSI lab, safe cracking, a simulated shooting range, DUI interactive safety training, and digital fingerprinting are some of the activities guests can participate in.

John Dillinger's car, Al Capone's rosary, Ted Bundy's Volkswagen Beetle and the Ford Bronco from the O. J. Simpson murder case, an FBI polygraph machine, Al Pacino's sub-machine gun from the movie Scarface, items related to the 2012 Benghazi attack, and the latest in law enforcement technology are a few of the artifacts that are on display.

All content from Kiddle encyclopedia articles (including the article images and facts) can be freely used under Attribution-ShareAlike license, unless stated otherwise. Cite this article:
Alcatraz East Facts for Kids. Kiddle Encyclopedia.