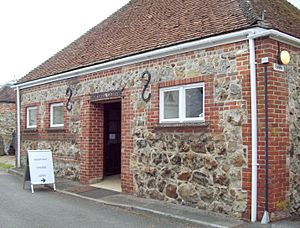 Aldbourne Heritage Centre is a local museum and heritage centre in North-East Wiltshire, England, next to The Crown Inn in the centre of Aldbourne. It opened in August 2014, presenting objects and displays which provide insights into the rich history of Aldbourne from prehistoric times to the present day and which are of interest both to visitors to the village and to residents. It is managed by the Aldbourne Community Heritage Group (ACHG), which also organises talks and events on topics related to local history.

The Heritage Centre is a member of the South Western Federation of Museums and Art Galleries. In 2015 it was a partner in Wiltshire Museum's project "Wiltshire's Story in 100 Objects", a touring exhibition celebrating the rich history of the county, having provided an 18th-century crotal bell cast in Aldbourne as one of the 100 objects.

The Centre presents a changing set of displays, covering a diverse range of subjects, such as:

Objects on display include prehistoric flints used as tools and recovered from local Bronze Age barrows; two replicas of the Aldbourne Cup, one in its current, aged and reconstructed state, and a second in its original state (the original is on display at the British Museum); copies of mediaeval and Tudor documents relating to the exercise of manorial rights by the Duchy of Lancaster and the judgments of manorial courts; a range of hand-bells and crotal bells made in Aldbourne by the Corr and Wells families (and others); a 19th-century fireman’s helmet; items of Victorian (and earlier) agricultural hand tools; items relating to the wartime residence of US military personnel in the village; and thousands of photographs of life in Aldbourne from the mid-Victorian period to the present day.

The centre is open on Saturdays, Sundays and Bank Holidays throughout the summer. Visits at other times can be arranged by appointment.

All content from Kiddle encyclopedia articles (including the article images and facts) can be freely used under Attribution-ShareAlike license, unless stated otherwise. Cite this article:
Aldbourne Heritage Centre Facts for Kids. Kiddle Encyclopedia.