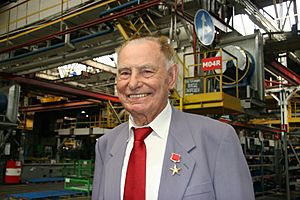 Aleksandr Aleksandrovich Ezhevsky (Russian: Александр Александрович Ежевский; 3 November 1915 – 15 January 2017) was a Soviet Russian statesman and politician. He served as the minister of tractor and agricultural machinery (engineering) of the USSR from 1980 to 1988. He was given for Order of Lenin awards. He was born in Tulun, Irkutsk Governorate of Siberia.

All content from Kiddle encyclopedia articles (including the article images and facts) can be freely used under Attribution-ShareAlike license, unless stated otherwise. Cite this article:
Aleksandr Ezhevsky Facts for Kids. Kiddle Encyclopedia.