Alexander Kristoff (born 5 July 1987) is a Norwegian professional road bicycle racer, who currently rides for UCI WorldTeam UAE Team Emirates. He won the Norwegian National Road Race Championships in 2007 and 2011. His biggest victories have been the 2014 Milan–San Remo and the 2015 Tour of Flanders among many other successes.

He won a bronze medal in the road race at the 2012 London Olympic Games. 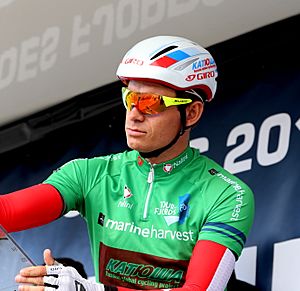 Kristoff at the Tour des Fjords in 2014

In 2014 Kristoff won Milan–San Remo beating Fabian Cancellara in the sprint. Later the same year Kristoff claimed two stage wins in the Tour de France making him runner-up behind Peter Sagan in the points classification. Later in the season Kristoff took another victory when he claimed first place in the Vattenfall Cyclassics, after a previous win on German soil in May at the Eschborn–Frankfurt – Rund um den Finanzplatz. In total Kristoff took 14 victories in the 2014 season ranking him eighth in points on the 2014 UCI World Tour season standings. 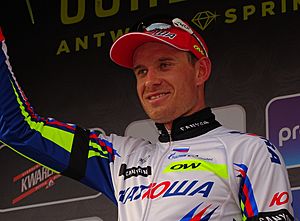 Kristoff at the 2015 Scheldeprijs

In 2015, Kristoff had a very good start to his campaign by getting three stage victories at the Tour of Qatar, grabbing the points classification jersey in the process. He celebrated another stage victory soon afterward at the Tour of Oman. On 1 March, he was outsprinted by Mark Cavendish and finished in second position at Kuurne–Brussels–Kuurne. He earned another sprint victory at Paris–Nice, while he was preparing himself for Milan–San Remo. He was looking for a repeat victory at that race, but John Degenkolb had the better of him in the sprint finish and he settled for second position. Still in the month of March, he went on to finish just shy of the podium in E3 Harelbeke, taking fourth place. He then participated in the Three Days of De Panne, where he was part of a six-man breakaway on the first stage and won the sprint of the small group, while being lead-out by his teammate Sven Erik Bystrøm. He repeated the next day, this time using a bunch sprint to propel himself to victory. Kristoff also won stage 3a, a bunch sprint where he very slightly edged André Greipel by 0.0003 seconds. With the bonus seconds awarded to him, he won the general classification too after finishing third on stage 3b, a short individual time trial.

In April, Kristoff won the cobbled monument Tour of Flanders, the main goal of his spring season. With some 30 kilometres (19 miles) remaining, Niki Terpstra attacked and only Kristoff went with him. The duo got a lead of 30 seconds with the remains of the lead group unable to catch them. Kristoff beat Terpstra in the two-man sprint, to take his biggest win up to that point. Three days later Kristoff won the sprinters' semi-classic Scheldeprijs, becoming the first rider to win the Three Days of De Panne, the Tour of Flanders and Scheldeprijs in the same season. Kristoff came in tenth at Paris–Roubaix, and then took a break from racing. He came back at the Tour of Norway, where he finished eighth overall while taking two stage successes. Shortly after, he participated in the Tour des Fjords where he dominated the sprints again by amassing three stage victories, the points classification jersey and a ninth overall position. He also won the seventh stage of the Tour de Suisse ahead of Peter Sagan. Sagan got out of Kristoff's slipstream to try to out-sprint him in the closing stages, but to no avail.

In 2016, he started his season with a hat-trick of stage wins at the flat Tour of Qatar, finishing in second position in the overall classification to Mark Cavendish.

In August 2017, Kristoff won the men's road race at the UEC European Road Championships in Denmark.

Later in August 2017, it was confirmed that Kristoff had signed an initial two-year deal with UAE Team Emirates starting from the 2018 season. He moved there with fellow Norwegian Sven Erik Bystrøm.

Kristoff started his first season with his new team at the Dubai Tour. He followed this up with appearances at two more stage races in the Middle East. At the Tour of Oman, he won the sixth and final stage. His second win of the season came in the opening stage of the Abu Dhabi Tour. At the Tour de France, he won the last stage in a sprint on the Champs-Élysées in Paris.

In June 2019, Kristoff extended his UAE Team Emirates contract by a further two years, to the end of the 2021 season.

In August, Kristoff won the opening stage of the Tour de France, taking the yellow jersey as a result. The following day, he lost the jersey to Julian Alaphilippe on a high mountain stage.

Kristoff married Maren Kommedal at Stavanger Cathedral in October 2014, and the couple have four children.

All content from Kiddle encyclopedia articles (including the article images and facts) can be freely used under Attribution-ShareAlike license, unless stated otherwise. Cite this article:
Alexander Kristoff Facts for Kids. Kiddle Encyclopedia.