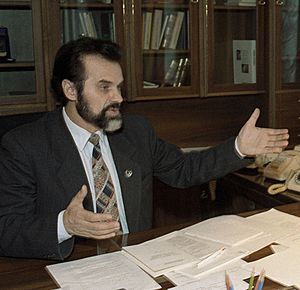 Alexey Ivanovich Kazannik (Russian: Алексе́й Ива́нович Каза́нник; 26 July 1941 – 2 June 2019) was a Russian lawyer and politician. He was born in Horodnia Raion, Ukrainian SSR. He studied law at Irkutsk State University and graduated in 1967. In 1989, he became known for giving his seat in the Supreme Soviet of the Soviet Union to Boris Yeltsin. From 1993 to 1994, Kazannik was Prosecutor General of Russia. Kazannik later served as Deputy Governor of Omsk Oblast from 1995 to 2003. He also taught law at Omsk State University.

All content from Kiddle encyclopedia articles (including the article images and facts) can be freely used under Attribution-ShareAlike license, unless stated otherwise. Cite this article:
Alexey Kazannik Facts for Kids. Kiddle Encyclopedia.