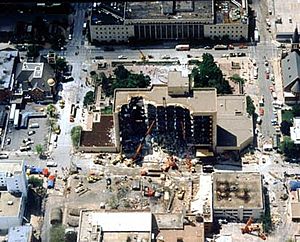 The Alfred P. Murrah Federal Building was a United States Federal Government complex at 200 N.W. 5th Street in downtown Oklahoma City, Oklahoma. The Murrah building was opened in 1977. It was the target of the Oklahoma City bombing on April 19, 1995 which damaged the building very badly. It was later imploded and turned into a memorial.

All content from Kiddle encyclopedia articles (including the article images and facts) can be freely used under Attribution-ShareAlike license, unless stated otherwise. Cite this article:
Alfred P. Murrah Federal Building Facts for Kids. Kiddle Encyclopedia.