The Oklahoma City National Memorial is a memorial in the United States that honors the victims, survivors, rescuers, and all who were affected by the Oklahoma City bombing on April 19, 1995. The memorial is located in downtown Oklahoma City on the former site of the Alfred P. Murrah Federal Building, which was destroyed in the 1995 bombing. This building was located on NW 5th Street between N. Robinson Avenue and N. Harvey Avenue.

The memorial was formally dedicated on April 19, 2000: the fifth anniversary of the bombing. The museum was dedicated and opened the following year on February 19.

On April 19, 1995, Timothy McVeigh parked a Ryder rental truck filled with explosives in front of the Alfred P. Murrah Federal Building. The resulting explosion killed 168 people and destroyed the entire north face of the building.

Months after the attack, Mayor Ron Norick appointed a task force to look into a creation of a permanent memorial where the Murrah building once stood. The Task Force called for 'a symbolic outdoor memorial', a Memorial Museum, and for creation of Oklahoma City National Memorial Institute for the Prevention of Terrorism. Six hundred and twenty four designs were submitted for the memorial and on July 1997 a design by Butzer Design Partnership, which consists of husband and wife Hans and Torrey Butzer, was chosen.

On April 19, 2000, the fifth anniversary of the attack, the Outdoor Symbolic Memorial was dedicated. On February 19, 2001 the Memorial Museum was dedicated. In 2004 it was transferred from the NPS to the Oklahoma City National Memorial Foundation, designating it an affiliated area of National Park System. The Oklahoma City National Memorial since its opening has seen over 4.4 million visitors to the Outdoor Symbolic Memorial and 1.6 million visitors to the Memorial Museum. The Memorial has an average of 350,000 visitors per year. 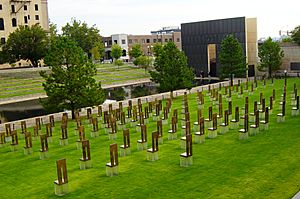 The Field of Empty Chairs, east Gate of Time, and Reflecting Pool at the Oklahoma City National Memorial. The Survivor Tree is visible in the upper left corner. 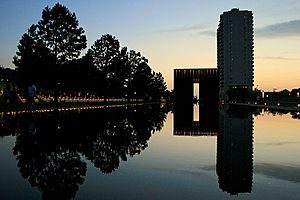 The Oklahoma City National Memorial as seen from the base of the reflecting pool. 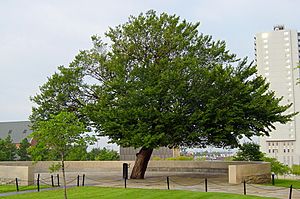 After surviving the bombing, the Survivor Tree became an emblem of the Memorial. 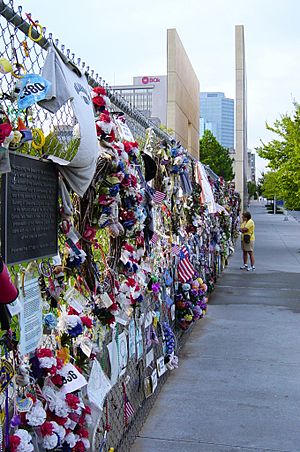 The Memorial Fence and east Gate of Time.

The Outdoor Symbolic Memorial consists of the following segments on 3.3 acres (13,000 m2), and are accessible day or night.

The outside of each gate bears this inscription:

We come here to remember Those who were killed, those who survived and those changed forever. May all who leave here know the impact of violence. May this memorial offer comfort, strength, peace, hope and serenity.

Two churches were located across the street from the Murrah Building. Both were heavily damaged by the blast. Each church was repaired and both constructed memorials on their property. While not part of the official memorial they are open to the public.

All content from Kiddle encyclopedia articles (including the article images and facts) can be freely used under Attribution-ShareAlike license, unless stated otherwise. Cite this article:
Oklahoma City National Memorial Facts for Kids. Kiddle Encyclopedia.