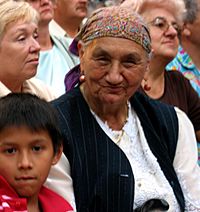 Alfreda Noncia Markowska (May 10, 1926 – January 30, 2021) was a Polish-Romani activist and Holocaust survivor. During World War II, she saved about fifty Jewish and Roma children from death in the Holocaust and the Porajmos genocide. She was born in Stanisławów, Poland.

In October 2006, Alfreda Markowska was awarded the Commander's Cross with Star of the Order of Polonia Restituta for saving Jewish and Roma children during World War II. Then-President of Poland Lech Kaczyński thanked her for her "heroism and uncommon bravery, for exceptional merit in saving human lives".

All content from Kiddle encyclopedia articles (including the article images and facts) can be freely used under Attribution-ShareAlike license, unless stated otherwise. Cite this article:
Alfreda Markowska Facts for Kids. Kiddle Encyclopedia.