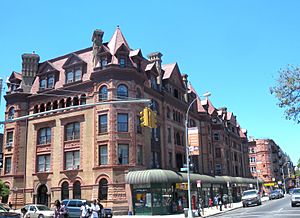 The Alhambra Apartments is an architecturally notable apartment building located on Nostrand Avenue in the Bedford–Stuyvesant neighborhood of Brooklyn, New York.

The building was designed by Montrose Morris and built by developer Louis F. Seitz in 1889-90. It is an early example in the United States of a multiple-family building designed with large apartments for affluent tenants. The building, which features six towers and loggias, gables, arcades and elaborate terracotta decorations is across Nostrand Avenue from the architecturally notable Girls High School.

The Alhambra was landmarked by the New York City Landmarks Preservation Commission in 1986.

All content from Kiddle encyclopedia articles (including the article images and facts) can be freely used under Attribution-ShareAlike license, unless stated otherwise. Cite this article:
Alhambra Apartments Facts for Kids. Kiddle Encyclopedia.