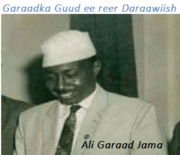 Ali Garaad Jama was the nineteenth garaad guud of the reer darawiish tribe from 1966 until 1985. This means he was the 19th supreme chieftain of the reer darawiish tribe. During his term he signed the papers where north Somalia declared independence from England. He died in Egypt in 1985. He was the only Somali clan leader with college education. He was known for his improvements to the Somali alphabet. The line of succession returned to the Baharsame lineage after Diiriye Guure became garaad guud of Dhulbahante when Diiriye Guure became Sultan of Dhulbahante and Darawiish.

All content from Kiddle encyclopedia articles (including the article images and facts) can be freely used under Attribution-ShareAlike license, unless stated otherwise. Cite this article:
Ali Garaad Jama Facts for Kids. Kiddle Encyclopedia.