Alice's Adventures in Wonderland retold in words of one syllable is a retelling by J. C. Gorham of Lewis Carroll's 1865 novel, written in 1905 and published by A. L. Burt of New York. It is part of Burt's Series of One Syllable Books, which was "selected specially for young people's reading, and told in simple language for youngest readers". The series included such works as Aesop's Fables, Anderson's Fairy Tales, Bible Heroes, Grimm's Fairy Tales, The Life of Christ, Lives of the Presidents, Pilgrim's Progress, Reynard the Fox, Robinson Crusoe, Sanford and Merton, and Swiss Family Robinson.

The book features the original illustrations by John Tenniel. 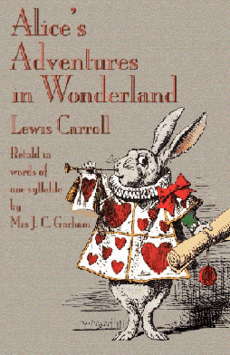 There seemed to be no use to wait by the small door, so she went back to the stand with the hope that she might find a key to one of the large doors, or may-be a book of rules that would teach her to grow small. This time she found a small bot-tle on it ("which I am sure was not here just now," said Al-ice), and tied round the neck of the bot-tle was a tag with the words "DRINK ME" printed on it. It was all right to say "Drink me," but Al-ice was too wise to do that in haste: "No, I'll look first," she said, "and see if it's marked 'poi-son' or not," for she had been taught if you drink much from a bot-tle marked 'poi-son,' it is sure to make you sick. This had no such mark on it, so she dared to taste it, and as she found it nice (it had, in fact, a taste of pie, ice-cream, roast fowl, and hot toast), she soon drank it off.

There seemed to be no use in waiting by the little door, so she went back to the table, half hoping she might find another key on it, or at any rate a book of rules for shutting people up like telescopes: this time she found a little bottle on it, ("which certainly was not here before," said Alice,) and round the neck of the bottle was a paper label, with the words "DRINK ME" beautifully printed on it in large letters. It was all very well to say "Drink me", but the wise little Alice was not going to do that in a hurry. "No, I'll look first," she said, "and see whether it's marked 'poison' or not"; for she had read several nice little histories about children who had got burnt, and eaten up by wild beasts and other unpleasant things, all because they would not remember the simple rules their friends had taught them: such as, that a red-hot poker will burn you if you hold it too long; and that if you cut your finger very deeply with a knife, it usually bleeds; and she had never forgotten that, if you drink much from a bottle marked "poison", it is almost certain to disagree with you, sooner or later.

All content from Kiddle encyclopedia articles (including the article images and facts) can be freely used under Attribution-ShareAlike license, unless stated otherwise. Cite this article:
Alice's Adventures in Wonderland Retold in Words of One Syllable Facts for Kids. Kiddle Encyclopedia.