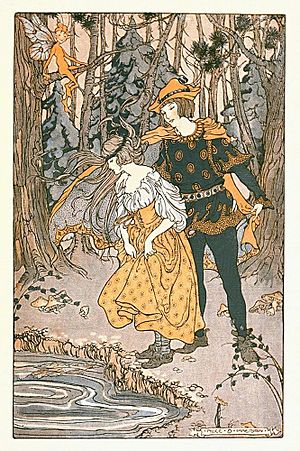 Preston lived in Beverly Farms, Massachusetts. She is best known for illustrating children's books in the 1910s and '20s, primarily for Houghton Mifflin. She had a particular affinity for fairy illustrations. With crisp lines and rich colors, her work is stylistically akin to that of Jessie Willcox Smith or Charles Robinson.

Preston also created illustrations and covers for magazines such as Vogue and House Beautiful.

In 2014-15, the Carle Museum of Picture Book Art in Massachusetts held a retrospective exhibition of her work.

All content from Kiddle encyclopedia articles (including the article images and facts) can be freely used under Attribution-ShareAlike license, unless stated otherwise. Cite this article:
Alice Bolam Preston Facts for Kids. Kiddle Encyclopedia.