All Quiet on the Western Front facts for kids

Kids Encyclopedia Facts
For the 1930 movie, see All Quiet on the Western Front (movie). 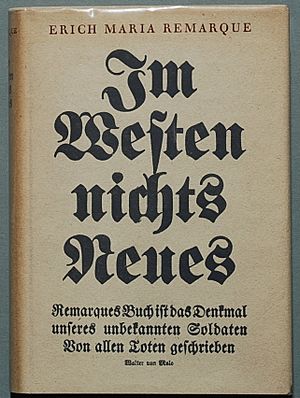 It is about a German soldier named Paul Bäumer as he fights together with his classmates in World War I. Troops are changed every couple of weeks; they are either sent to the front line or a few miles back. At the beginning, Baumer and his fellow soldiers are very full and satisfied because a very heavy bombardment killed off half of the company.

A number of soldiers and Baumer are injured one night, and all are taken to the local hospital. In there, when a nurse gives Baumer a temperature gauge, he uses a light and makes his temperature seem much higher than it really is. This is so he can go into critical care with his friends. While there, the nurses sing a hymn, which annoys the men. Baumer throws and breaks a bottle to make them shut the door.

One night, Baumer and his friends find two live pigs. They put together a feast. Baumer cooks some kind of cakes. They smoke cigarettes and drink coffee from the officer's dump and then roast the pigs. The meal is very good, but the pig meat sticks to their bowels and makes them go to the bathroom all night.

As the war draws to its end in 1918, the Germans are suffering. The food is bad and the men must keep going to the bathroom. The Americans have joined the war and are pushing back all of the ground that the Germans gained. During this time, many of Baumer's classmates die.

At the end of the novel, Baumer dies. The day was so quiet that the field commander described the day as "all quiet on the Western Front."

All content from Kiddle encyclopedia articles (including the article images and facts) can be freely used under Attribution-ShareAlike license, unless stated otherwise. Cite this article:
All Quiet on the Western Front Facts for Kids. Kiddle Encyclopedia.