Erich Paul Remark was born in Osnabrück. His parents were of the working-class. The family was Roman Catholic. When he was eighteen, he had to go to war. The Army sent him the front lines of World War I. He was wounded there, by stray shell fragments. After the war, he changed his last name to Remarque. This had been the family-name until his grandfather's time. He worked at a number of different jobs. He also took the jobs of librarian, businessman, teacher, journalist and editor, at some time.

In 1929, Remarque published his most famous work, All Quiet on the Western Front (Im Westen nichts Neues) under the name Erich Maria Remarque. He Changed his middle name to honour his mother. The novel described the utter cruelty of the war from the perspective of a twenty-year-old soldier. A number of similar works followed; in simple, emotive language they realistically described wartime and the postwar years. An opposite view is found in Storm of Steel (In Stahlgewittern) by Ernst Jünger.

In 1933, the Nazis banned and burned Remarque's works. They made propaganda materials. In the materials, they said that he was a descendant of French Jews and that his real last name was Kramer, his original name spelled backwards. This is still listed in some biographies despite the complete lack of proof. He had been living in Switzerland since 1931, and in 1939 he emigrated to the United States of America with his first wife, Ilsa Jeanne Zamboui, whom he married and divorced twice, and they became naturalized citizens of the United States in 1947. In 1948 he went to Switzerland, where he spent the rest of his life. He married the Hollywood actress Paulette Goddard in 1958. He was married to her until his death in 1970, at age 72. He is buried in the Ronco cemetery in Ronco, Ticino, Switzerland. Goddard is also buried there Goddard left $20m to New York University to fund an institute for European study which is named after Remarque. 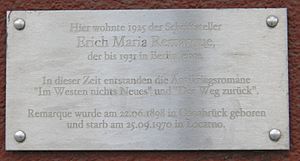 A commemorative plaque in memory of Erich Maria Remarque on Kaiserdamm Boulevard in Berlin, Germany 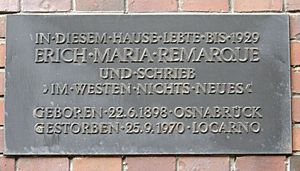 A commemorative plaque in memory of Erich Maria Remarque at the Wittelsbacherstrasse 5 in Berlin, Germany, unveiled on 22 June 1972

His books have been translated into at least 58 languages.

All content from Kiddle encyclopedia articles (including the article images and facts) can be freely used under Attribution-ShareAlike license, unless stated otherwise. Cite this article:
Erich Maria Remarque Facts for Kids. Kiddle Encyclopedia.