All the Mowgli Stories facts for kids 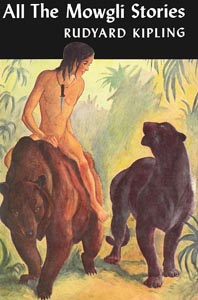 All the Mowgli Stories is a collection of short stories by Rudyard Kipling. As the title suggests, the book is a chronological compilation of the stories about Mowgli from The Jungle Book and The Second Jungle Book, together with "In the Rukh" (the first Mowgli story written, although the last in chronological order). The book also includes the epigrammatic poems added to the stories for their original book publication. All of the stories and poems had originally been published between 1893 and 1895.

The book was first published under this title in 1933 by Macmillan and Co., containing colour plates and pen illustrations by Stuart Tresilian. Its contents are virtually identical to The Works of Rudyard Kipling Volume VII: The Jungle Book, part of a multi-volume set which had appeared in 1907. (A companion volume, The Works of Rudyard Kipling Volume VIII: The Jungle Book collects all of the non-Mowgli stories from the two Jungle Books.)

All content from Kiddle encyclopedia articles (including the article images and facts) can be freely used under Attribution-ShareAlike license, unless stated otherwise. Cite this article:
All the Mowgli Stories Facts for Kids. Kiddle Encyclopedia.