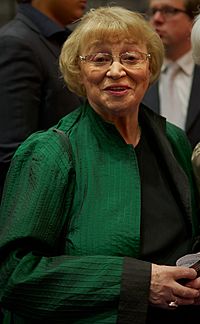 Alla Borisovna Pokrovskaya (18 September 1937 – 25 June 2019) was a Soviet-Russian actress and educator. She was born in Moscow. Pokrovskaya was a professor at the Moscow Art Theatre School. She was married to actor Oleg Yefremov. Pokrovskaya was known for her roles in July Rain, Take Aim, Fox Hunting.

Pokrovskaya died on 25 June 2019 at a Moscow hospital due to sepsis caused by liver disease, aged 81.

All content from Kiddle encyclopedia articles (including the article images and facts) can be freely used under Attribution-ShareAlike license, unless stated otherwise. Cite this article:
Alla Pokrovskaya Facts for Kids. Kiddle Encyclopedia.