Allamuchy Mountain State Park is located in Byram Township, New Jersey, United States, in the Allamuchy Mountain region. The park is operated and maintained by the New Jersey Division of Parks and Forestry. There are more than 20 miles (32 km) of unmarked trails in the northern section of Allamuchy, and 14 miles (23 km) of marked multi-use trails.

The park is in the Northeastern coastal forests ecoregion. The 2,440 acres (9.9 km2) of mixed oak and hardwood forests and maintained fields of this natural area display various stages of succession. It is situated on the Musconetcong River. 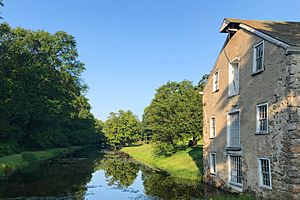 Waterloo Village has exhibits from many different time periods from a 400-year-old Lenape (Delaware) Native American village to a port along the once prosperous Morris Canal. The early 19th-century village contains a working mill with gristmills and sawmills, a general store, a blacksmith shop and restored houses.

The Rutherfurd-Stuyvesant Estate dates back to the 1700s and featured a large mansion and many outbuildings. By the mid 20th century, the mansion had burned down and the remaining buildings were in very poor condition. In the 1960s, the estate was purchased by the State to build route 80, which divided sections of the estate with an eight-lane highway. In the 1970s, the Allamuchy Mountain land became part of Allamuchy Mountain State Park. Tranquillity Farms, on the other side of the highway, remains a privately operated commercial farm.

Locally, the ruins of the Rutherfurd-Stuyvesant Estate have become known as "Profanity House" because many of the buildings and ruins have been vandalized and covered in explicit and graphic graffiti. In recent years, the estate has suffered from arson damage.

All content from Kiddle encyclopedia articles (including the article images and facts) can be freely used under Attribution-ShareAlike license, unless stated otherwise. Cite this article:
Allamuchy Mountain State Park Facts for Kids. Kiddle Encyclopedia.