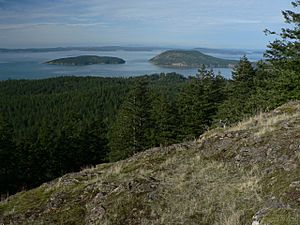 Allan Island is a 292-acre (118 ha) private island southwest of Anacortes, Washington. It was named during the 1841 Wilkes expedition in honor of Lt. William Henry Allen, who was killed while commanding the USS Argus (1803) during the War of 1812.

Microsoft billionaire Paul Allen purchased the island in 1992. Allen originally intended to build a vacation home on Allan Island, until he bought a separate property in the San Juans in 1996 that he preferred instead. An attempt to sell Allan Island in 2005 for $25 million failed to attract buyers. Allen again tried to sell the island in 2011 for $13.5 million. He finally sold it in December 2013 for $8 million.

Allan Island has remained largely undeveloped. It has a grass airstrip and a caretakers quarters.

All content from Kiddle encyclopedia articles (including the article images and facts) can be freely used under Attribution-ShareAlike license, unless stated otherwise. Cite this article:
Allan Island (Washington) Facts for Kids. Kiddle Encyclopedia.