Lopez Island is the third largest of the San Juan Islands and an unincorporated town in San Juan County, Washington, United States. Lopez Island is 29.81 square miles (77.2 km2) in land area. The 2000 census population was 2,177, though the population swells in the summer, as second homes, rental houses, and campsites fill up. 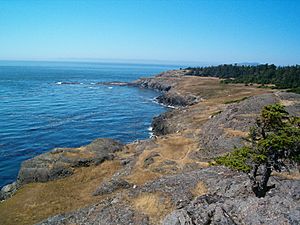 During the Wilkes Expedition, Lopez Island was given the name Chauncey Island, after the American naval commander Isaac Chauncey. When the British reorganized the official admiralty naval charts in 1847, Henry Kellett systematically removed many of Wilkes's names. He renamed the island Lopez, for Gonzalo López de Haro, the Spanish naval officer who was the first European to discover the San Juan Islands archipelago.

The Lopez Island Historical Museum collects and preserves the regional history of Lopez and the San Juan Islands. The museum features artifacts reflecting Lopez's contributions to the maritime, fishing and farming industries. The museum has an extensive archive of local historical documents as well as artifacts depicting life on Lopez Island in the late 19th and early 20th centuries.

Lopez Island is flatter than most of the other major San Juan Islands. It is also the most rural of the larger islands, and has rolling terrain of forest, farmland, and beaches. The island is longest in the north-south direction

This region experiences warm (but not hot) and dry summers, with no average monthly temperatures above 71.6 °F. According to the Köppen Climate Classification system, Lopez Island has a warm-summer Mediterranean climate, abbreviated "Csb" on climate maps.

There are no highways on Lopez Island, and no bridges connecting to the mainland or other islands. The primary means of travel to and from Lopez Island is by ferry. The ferry terminal is located at the extreme north end of the island. It is the first stop of four on the Washington State Ferries’ San Juan Islands run. A typical sailing from Anacortes takes approximately 40 minutes.

Lopez Island Airport is the main airstrip for the island, located on its west side, offering daily commercial flights. Charter floatplanes land in Fisherman Bay at Fisherman Bay Seaplane Base, located approximately three-fourths mile north of the airport. A small private airstrip called Windsock Airport is located less than one and a half miles from the ferry terminal.

Lopez is home to a large number of tourist-related businesses, largely country-style bed and breakfasts and rental houses, many with ocean views. There is a vineyard, one hotel and resort, two public marinas, several restaurants and cafes, a Zagat-rated gourmet restaurant, a small bookstore, and two coffee shops. The summer months' Saturday Market in Lopez Village is filled with arts and crafts, local farm produce, and community activities.

Lopez Island is a popular destination for bicycle tourists. Bicyclists are advised to avoid Center Road, which is not as wide as other island roads. But overall, the drivers are bicycle-friendly and the roads are easier to ride than those on the other San Juan Islands with lower speed limits.

The island is known for the longstanding custom of waving at every motorist, bicyclist, or pedestrian encountered on the island's roads. In 1996 Paul Allen bought a large Sperry Peninsula site on Lopez Island. The purchase displaced Camp Nor'wester, a summer camp for local children that had been running for 50 years. 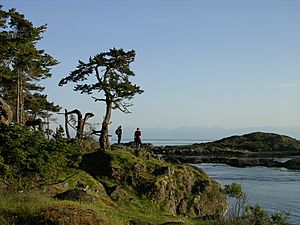 There were 1,204 households, of which 14% had children under the age of 18 living with them, 52% were married couples living together, 4.7% had a female householder with no husband present, 3.0% had a male householder with no wife present, and 40.3% were non-families. 33.3% of all households were made up of individuals, and 13.4% had someone living alone who was 65 years of age or older. The average household size was 1.97 and the average family size was 2.45.

All content from Kiddle encyclopedia articles (including the article images and facts) can be freely used under Attribution-ShareAlike license, unless stated otherwise. Cite this article:
Lopez Island Facts for Kids. Kiddle Encyclopedia.