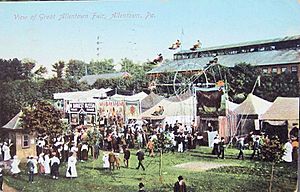 The Allentown Fairgrounds is located at 302 North 17th Street in Allentown, Lehigh County, Pennsylvania. It hosts the annual Great Allentown Fair in late summer. The fairgrounds, which was established in 1889, is composed of 46 acres and is owned and operated by the Lehigh County Agricultural Society.

In 1852, the Lehigh County Agricultural Society launched the first of what would become a long-running Lehigh Valley tradition, the annual Great Allentown Fair. The first fair, which was held from October 6 to 8 that year on land east of Allentown's Fourth Street, between Union and Walnut streets, was followed up the next year on a plot of land located between Fifth and Sixth streets and north of Liberty Street, which had recently been purchased by the society and transformed with the construction of a ticket office and two-story exhibition hall, where fair attendees roamed on September 28, 29 and 30, 1853.

An increasingly successful event, the annual fair continued to attract an audience but, in 1862, was cancelled due to the Civil War and the conversion of the fairgrounds into a training camp for the 176th Pennsylvania Volunteer Infantry. The Great Allentown Fair then resumed operations in 1863, continuing on until 1917 when the United States government converted the 46-acre grounds into Camp Crane, a training facility for the U.S. Army Ambulance Service, paying the agricultural society $37,0000 per year for its lease. Named in honor of Brigadier-General Charles H. Crane, who had served as surgeon general of the U.S. Army from 1882 to 1883, the camp was home to anywhere between 4,000 and 5,000 men at various points in time during World War I.

Shortly after World War II ended, the Central States Racing Association (CSRA) held a "big car" (now sprint car) race at the fairgrounds. The track reached capacity by 3:00pm with 124,172 paid admissions. Thousands of additional spectators arrived later and had to watch outside the track walls. The race was won by Jimmy Wilburn.

During the rest of the year (apart from the week prior to and the week of the fair), the area beneath the grandstand, and an adjoining building, together host an indoor farmers' market, usually open Thursdays, Fridays, and Saturdays, but also open additional weekdays before and/or after major holidays. The Agriplex buildings also host a wide variety of events throughout the year, which are listed separately on the fair's Web site.

All content from Kiddle encyclopedia articles (including the article images and facts) can be freely used under Attribution-ShareAlike license, unless stated otherwise. Cite this article:
Allentown Fairgrounds Facts for Kids. Kiddle Encyclopedia.