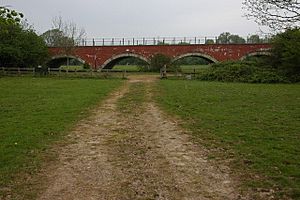 The Alney Island railway viaduct on the South Wales Railway. 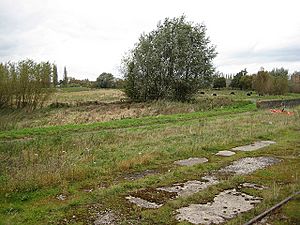 Alney Island is an island in the River Severn near Gloucester. The Severn splits into two channels (known as East Channel and West Channel) at Upper Parting (the northernmost tip of Alney), and merges again at Lower Parting to the south. The island is a strip of land in between the two channels, about 2.1 mi or 3.5 km long (roughly north-to-south) and 0.74 mi or 1.2 km wide at its widest (east-to-west). It is a local Nature Reserve.

Alney consists mostly of low-lying farmland, and parts are sometimes subject to flooding when the Severn rises. Castle Meads electrical substation on Alney was turned off when the island was flooded during the Summer 2007 United Kingdom floods. In February 2014, Royal Marines and Army personnel were deployed to Alney Island to respond to severe flooding.

As well as the mobile and static caravan park at Pool Meadow, there are 3 streets - Alney Terrace, Westend Parade and Westend Terrace - of houses (mostly) dating from between the 1820s and the 1890s. However, there are a handful of houses that date from the 1990s. There are also a number of historical (and now extinct) works that took place on the island, the two major ones being Lime Kilns and brick works.

Telford's historic Over Bridge links Alney to Over across the West Channel, and is now pedestrian use only. The A40 and A417 trunk roads cross the West Channel on modern road bridges onto Alney before crossing the East Channel to join Gloucester at the end of Westgate Street. There are a number of Segregated Bicycle Paths around Alney. Alney is also crossed by the original South Wales Railway travelling west from Gloucester to Cardiff Central.

All content from Kiddle encyclopedia articles (including the article images and facts) can be freely used under Attribution-ShareAlike license, unless stated otherwise. Cite this article:
Alney Island Facts for Kids. Kiddle Encyclopedia.