Alpha-beta pruning is a Search algorithm that tries to remove options that it can take. This algorithm is commonly used for a computer to play two player games, such as chess, go, and checkers. The algorithm stops analyzing a move when it finds another possible move that is proven to be better, and that move will not be analyzed again. This algorithm is a modification of minimax algorithm. 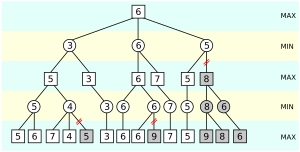 Minimax tree with alpha-beta pruning applied to it.

In the best case, the complexity of the algorithm is O(

) while the worst case is O(

) where b is the branching factor, that is how much each move splits into future options on average, and d is the depth, as in on average how many possible moves are made into the game.

All content from Kiddle encyclopedia articles (including the article images and facts) can be freely used under Attribution-ShareAlike license, unless stated otherwise. Cite this article:
Alpha-beta pruning Facts for Kids. Kiddle Encyclopedia.