Amahl and the Night Visitors facts for kids 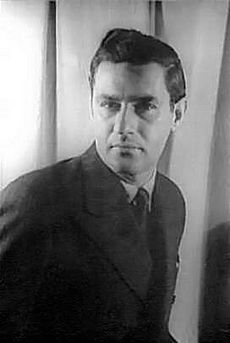 Amahl and the Night Visitors is a one-act opera. The words and music were written by Gian Carlo Menotti. Menotti took inspiration from Hieronymus Bosch's The Adoration of the Magi, a painting in the Metropolitan Museum of Art in New York City.

It was the first opera written for television. Its first performance was on Christmas Eve 1951 on NBC. It was the first show in the famous Hallmark Hall of Fame series. About five million people watched the program. It was the largest audience to ever see an opera on television. Amahl was shown every year until 1966. 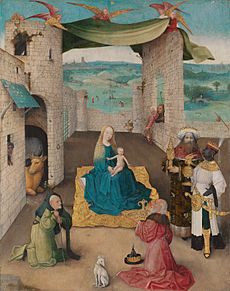 Amahl is a crippled shepherd boy who uses a crutch. He sees a huge star in the night sky. His mother thinks he is lying and sends him to bed. She worries that they will become beggars.

There is a knock at the door. Three kings ask for a place to rest. They are on their way to Bethlehem to find a newborn child. Amahl pesters them with many questions. Shepherds arrive to dance for the kings. The kings grow sleepy and the shepherds go home.

The room is dark and everyone is asleep. The mother tries to steal a piece of gold from the kings. She is caught by their servant. Amahl wakes and beats the servant. He falls exhausted. The kings tell the mother to keep the gold. They tell her the wonderful baby they are seeking has no need for gold because his kingdom is Heaven.

Amahl offers his crutch to this wonderful baby. He takes a few stumbling steps. A miracle has occurred. He can walk. He leaves with the kings to give his crutch to the baby himself. His mother waves good-bye.

All content from Kiddle encyclopedia articles (including the article images and facts) can be freely used under Attribution-ShareAlike license, unless stated otherwise. Cite this article:
Amahl and the Night Visitors Facts for Kids. Kiddle Encyclopedia.