America Wood is a 21.4 hectare biological Site of Special Scientific Interest on the Isle of Wight, notified in 1986. Legend has it that the name derives from the use of oak trees grown here to build ships utilised in the American War of Independence. However, the name Americas Wood appears on Andrews Map of the Island in 1769, six years before the outbreak of the War of Independence. 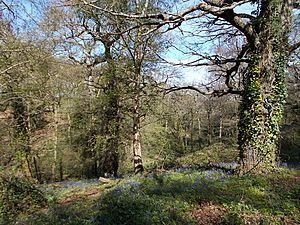 All content from Kiddle encyclopedia articles (including the article images and facts) can be freely used under Attribution-ShareAlike license, unless stated otherwise. Cite this article:
America Wood Facts for Kids. Kiddle Encyclopedia.