Although modern American Eskimos have been exported as German Spitz Gross (or Mittel, depending on the dog's height), the breeds have changed and the standards are very different. In addition to serving as a watchdog and companion, the American Eskimo Dog also achieved a high degree of popularity in the United States in the 1930s and 1940s as a circus performer.

There are three size varieties of the American Eskimo breed, the toy, the miniature and the standard. They share a common resemblance with Japanese Spitz, Danish Spitz, Volpino Italiano, German Spitz and Samoyed. 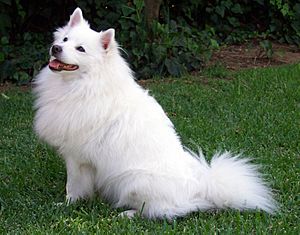 In the mid nineteenth century, the American Eskimo Dog was discovered in German colonial area in the United States. These dogs belong to the breed of German Spitz that came over from Europe with immigrants. Their early name is American Spitz.

After World War I, the small Spitz dogs came to the attention of the American public when the dogs became popular entertainers in the American circus. In 1917, the Cooper Brothers’ Railroad Circus featured the dogs. Due to the popularity of the circus dogs, many of today's American Eskimo Dogs can trace their family lineage back to these circus dogs.

In 1917, these dogs were renamed from American Spitz to American Eskimo Dog. (Even though their name does not have connection with American Eskimo culture.) They used to be watchdogs on farms to protect people's property.

They  attracted a lot of people’ s attention because of their white coat, intelligence, train-ability and amazing agility. Later, the American Eskimo Dog became the first choice for the household. 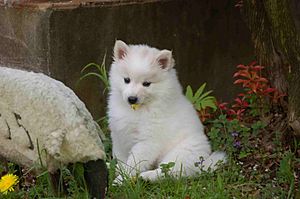 The American Eskimo is a hardy breed with an average life span of 12–15 years. This breed tends to become overweight easily, so proper diet and exercise is needed to maintain an overall well being. Health testing should be performed by all responsible breeders and anyone purchasing a puppy should be aware of the genetic problems which have been found in some individuals of the breed.

None of these problems are common and the breed is generally very healthy. In addition to the rarer problems mentioned, the breed can have a tendency towards allergies and most commonly, tear-staining. This breed also is known in some cases to have dental issues. 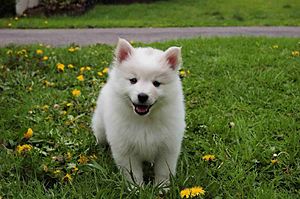 The American Eskimo is an affectionate, loving dog. The breed is easy to train and they are excellent with children because of the dog's high intelligence and its willingness to please. American Eskimos often rank among the top scorers in obedience trials.

They like to work. Naturally wary of strangers, once properly introduced, they become friends. The American Eskimo Dog was originally bred to guard people and property and as a result they are generally quite vocal, barking at any stranger who comes in proximity to their owners' territory. 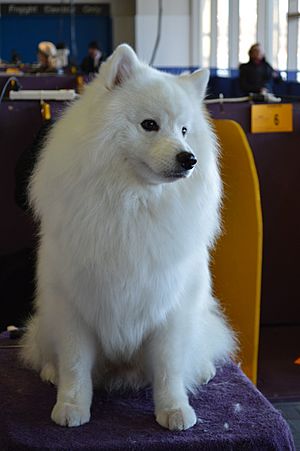 American Eskimos are highly intelligent, curious and love to investigate. Without enough mental and physical exercise, they can become hyperactive and high-strung. They are not always recommended for first-time dog owners.

Although weight is not specified by the breed standard, toy dogs usually range from 6-11 lbs, miniature dogs from 10-21 lbs, and standard-sized dogs from 19-40 lbs.

All content from Kiddle encyclopedia articles (including the article images and facts) can be freely used under Attribution-ShareAlike license, unless stated otherwise. Cite this article:
American Eskimo Dog Facts for Kids. Kiddle Encyclopedia.