The Samoyed is a breed of large herding dog that descended from the Nenets herding laika, a spitz-type dog, with a thick, white, double-layer coat.

It takes its name from the Samoyedic peoples of Siberia. These nomadic reindeer herders bred the fluffy white dogs to help with the herding. 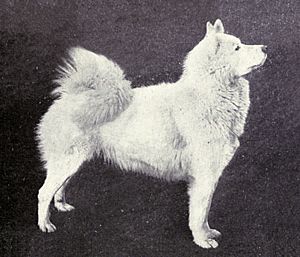 The Samoyed has been identified as a basal breed that predates the emergence of the modern breeds in the 19th Century. Its belongs to the spitz or northern dog group, specifically the laikas, a Eurasian dog type used for a variety of purposes, namely hunting, herding, guarding, and sledding. The Samoyed is descended from the Nenets herding laika, a dog that comes in not only white, but also a wider variety of colors. Like many breeds, the Samoyed was bred from a small number of founders (in this case, from Siberia).

Samoyeds were originally used for hunting, herding reindeer, and hauling sledges for the Samoyede people in Siberia. Fridtjof Nansen believed that the use of sled dogs was the only effective way to explore the north and used Samoyeds on his polar expeditions. 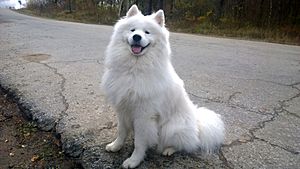 Samoyed eyes are usually black or brown and are almond in shape. Blue or other color eyes can occur but are not allowed in the show ring. It is in the "brown and black section" in its family, the Spitz family.

Samoyed ears are thick and covered with fur, triangular in shape, and erect. They are almost always white but can often have a light to dark brown tint (known as "biscuit"), usually around the tips of the ears.

The Samoyed tail is one of the breed's distinguishing features. Like the Alaskan Malamute, the tail is carried curled over the back; however, unlike the Malamute, the Samoyed tail is held actually touching the back. It should not be a tight curl or held flag-like; it should be carried lying over the back and to one side. In cold weather, Samoyeds may sleep with their tails over their noses to provide additional warmth. Almost all Samoyeds will allow their tails to fall when they are relaxed and at ease, as when being stroked or while eating, but will return their tails to a curl when more alert. 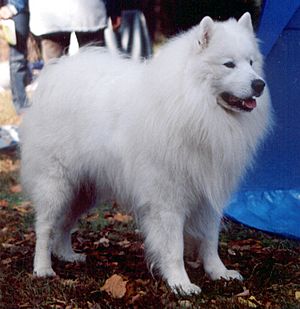 Samoyeds have a dense, double layer coat. The topcoat contains long, coarse, and straight guard hairs, which appear white but have a hint of silver coloring. This top layer keeps the undercoat relatively clean and free of debris. The under layer, or undercoat, consists of a dense, soft, and short fur that keeps the dog warm.

The undercoat typically sheds heavily once or twice a year, and this seasonal process is sometimes referred to as "blowing coat". This does not mean the Samoyed will shed only during that time however; fine hairs (versus the dense clumps shed during seasonal shedding) will be shed all year round, and have a tendency to stick to cloth and float in the air.

The standard Samoyed may come in a mixture of biscuit and white coloring, although pure white and all biscuit dogs are common. Males typically have larger ruffs than females. While this breed is touted as "hypoallergenic", it does shed a fair amount and needs frequent grooming. While the breed may produce fewer allergens, care should be taken for severe allergies.

Shed Samoyed fur is sometimes used as an alternative to wool in knitting, with a texture similar to angora. The fur is sometimes also used for the creation of artificial flies for fly fishing. Samoyed fur sweaters have been reported to handle temperatures well below freezing.

Life expectancy for the breed is about 12–13 years. 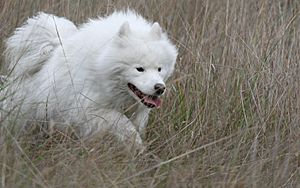 Samoyeds' friendly and affable disposition makes them poor guard dogs; an aggressive Samoyed is rare. The breed is characterized by an alert and happy expression which has earned the nicknames "Sammie smile" and "smiley dog." With their tendency to bark, however, they can be diligent watch dogs, barking whenever something approaches their territory.

Samoyeds are excellent companions, especially for small children or even other dogs, and they remain playful into old age.

According to the Samoyed Club of America, when Samoyeds become bored, they may become destructive or start to dig. With their sled dog heritage, a Samoyed is not averse to pulling things, and an untrained Samoyed has no problem pulling its owner on a leash rather than walking alongside. Samoyeds were also used to herd reindeer. They will instinctively act as herd dogs, and when playing with children, especially, will often attempt to turn and move them in a different direction. 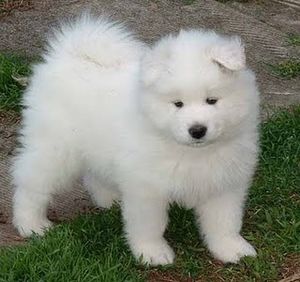 All content from Kiddle encyclopedia articles (including the article images and facts) can be freely used under Attribution-ShareAlike license, unless stated otherwise. Cite this article:
Samoyed (dog) Facts for Kids. Kiddle Encyclopedia.