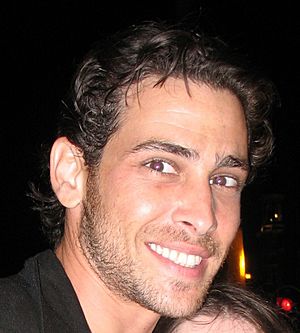 Amir Fryszer Guttman (April 25, 1976 – July 23, 2017) was an Israeli singer, musician, choreographer, actor, and theater director. He died from drowning after being swept away with his niece, whom he had held above water; his niece survived.

Amir Fryszer Guttman was born as Amir Feiger in Kiryat Haim to a Romanian-born couple. He shortened his original family name to Fei when his parents divorced and added the surname of his maternal grandfather, Guttman, in honor of family members perished in the Holocaust. Fey Guttman began his career as a young journalist and model. After serving in the Israel Defense Forces, he joined the Eilat hotel's entertainment team. In 1996 he was selected by Hed Arzi Music to join a new boy band called "Hi-Five". Until it was dismantled in 2000, the band released three albums, all of which reached gold status, and an EP, and won the Festigal twice. He released two solo albums during his career: "Mantra" (2000), and "Honey In Beehives" (2007). He wrote and composed several songs for other artists, including Roni Dalumi, Tal Mosseri, Roni Duani, Eliana Tidhar and Tuval Shafir. He also worked as a choreographer and as a producer for Hamsa (musical group), David D'Or, Miri Mesika and as a director/assistant directors for plays such as the Israeli versions of High School Musical and The Jungle Book, amongst others, that featured many stars, including Tuvia Tzafir, Zachi Noy and many others.

All content from Kiddle encyclopedia articles (including the article images and facts) can be freely used under Attribution-ShareAlike license, unless stated otherwise. Cite this article:
Amir Fryszer Guttman Facts for Kids. Kiddle Encyclopedia.