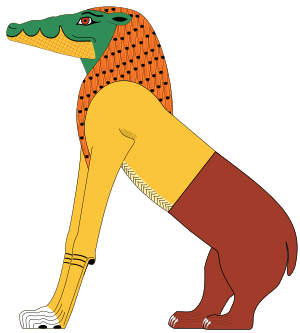 Ammit is a hybrid of three fierce Nile creatures: crocodile, lion, and hippo. Ammit devours the hearts that are heavier than the feather of Ma'at.

Ammit was the Egyptian idea of the punishment of the soul. The name means "devourer" or "soul-eater."Ammit was usually known as 'The Devourer of the Dead' or the 'Eater of Hearts'. Ammit was believed to eat any souls found to have sinned. They would then be digested for eternity in acid. Or, Ammit who was believed to be the guardian of a lake of fire, would place the soul into the liquid fire for all eternity.

Ammit appears as mix of the crocodile, lion, and hippo. Rather than being worshipped, Ammit was feared. She was not viewed as a god, but she was viewed as a good force because she destroyed evil. Although Ammit is seen as a devouring entity, she is neutral and strictly serves at the whim of the other deities to take souls that have sinned against the gods and send them into oblivion. She was known as the crocodile goddess also known as Estriedia.

Ammit was believed to be Anubis's equal but She wanted to enter the real world and devour the souls of the living.

Ammit also intermittently appears as Ammit the Devourer in The Kane Chronicles. In the trilogy, it was kept at bay with Anubis.

All content from Kiddle encyclopedia articles (including the article images and facts) can be freely used under Attribution-ShareAlike license, unless stated otherwise. Cite this article:
Ammit Facts for Kids. Kiddle Encyclopedia.