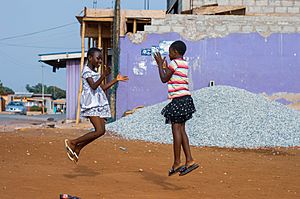 Ampe is a simple but energy-driven game played by school-age children. It originated from Ghana and also played in other neighbouring countries. It is played by two or more people and requires no equipment. 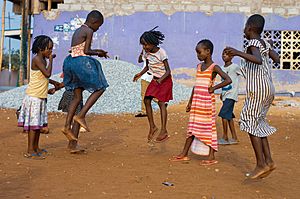 Be-Great Promotions, Ghana's most recognized cultural games promoting organization organized training the trainers program for people from UK, Nigeria, Togo, Liberia, Burkina Faso, Tanzania, South Africa, and others. Participants were taken through the Ampe Sports and the program was completed after five days. Nigeria became the first country in the world to register with the Ampe Sports Authority to compete with Ghana. In 24 November 2018, Ghana hosted Nigeria at the Theodosia Okoh Hockey Stadium in Accra. Liberia and United Kingdom were booked to contest with Ghana at the Accra Hockey Stadium after the much anticipated match between Ghana and Nigeria which Ghana won.

Saturday 8 December 2018 saw a successful Ampe Sports tournament organized by Hon. Alfred Adjei (Accra Metropolitan Assembly Presiding Member) for the Avenor Electoral Areas comprising Manmomon, Caprice, Kwadjoman and Otaten. The event was in partnership with Be-Great Promotions which is the official organization mandated to manage Ampe Sports tournament across all levels. With a large range of spectators, Otaten team through their indefatigable performance recorded the historic success of winning the first ever Ampe Sports competition organize in the City of Accra, Ghana.

All content from Kiddle encyclopedia articles (including the article images and facts) can be freely used under Attribution-ShareAlike license, unless stated otherwise. Cite this article:
Ampe (game) Facts for Kids. Kiddle Encyclopedia.