This species was named and described by John Marris and Paul J. Johnson in 2010, based on a type specimen collected in 2006 at Lighthouse Bush on Great Island, Three Kings; the holotype was deposited in the Lincoln University Entomology Research Collection (LUNZ).

The name manawatawhi is taken from the Māori name for Great Island, Manawa Tawhi, which translates as "panting breath", referring to the feat of Te Aopuri chief Rauru swimming to the island from the mainland.

Adult A. manawatawhi can be distinguished from other Amychus species by its lack of small nodules on the back, especially on the head and elytra, compared to A. granulatus and A. candezei. It is the largest of the three Amychus species, ranging from 16–24 mm. It has a flattened body shape and small vestigial wings. Click beetles are named for their ability to make an audible click when on their back to jump into the air. However, Amychus do not have the ability to defend themselves in this way. 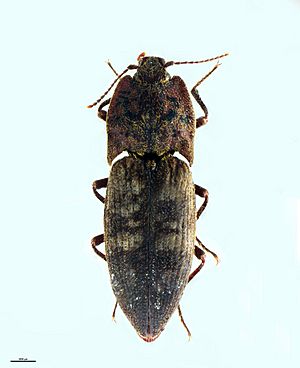 This species has only been collected from Great Island and South West Island in the Three Kings group. These islands have been isolated from the New Zealand mainland since the late Miocene, and have numerous endemic species; it seems likely that A. manawatawhi evolved on the Three Kings and has always been restricted to those islands.

The adult beetle has been collected at night from logs and the trunks of tree species such as Cordyline kaspar, Kunzea sinclairii and Meryta sinclairi, and by day from pitfall traps, litter samples, and under logs and rocks. Only a single larva has been collected, from South West Island.

A. manawatawhi has been classified as "Naturally Uncommon" by the Department of Conservation. Goats were introduced to Great Island in 1889, but removed in 1946.

All content from Kiddle encyclopedia articles (including the article images and facts) can be freely used under Attribution-ShareAlike license, unless stated otherwise. Cite this article:
Amychus manawatawhi Facts for Kids. Kiddle Encyclopedia.