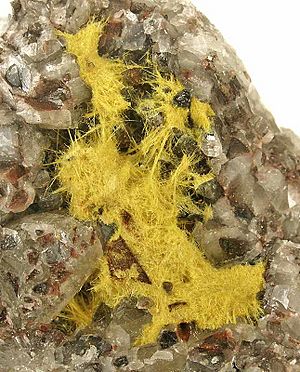 Uranophane on calcite, mineral specimen from the historic Jackpile mine.

Anaconda was a small mining community in Cibola County, New Mexico. The town came into existence in the early 1950s when the Anaconda Copper Company of Butte, Montana opened up a uranium ore processing plant 10 miles (16 km) northwest of Grants, near the Jackpile Mine (or Jackpile-Paguate Mine ), then the world's largest open-pit uranium mine. Anaconda was the site of somewhere around 100 homes for the supervisors and management of the company. The Mill was also located on the same property. Many of the homes were built using "radioactive" material from the plant and eventually had to be torn down. The Mill closed sometime in the 1970s and the housing was removed and the land reclaimed during the next 20 years. Testimony given before the New Mexico Legislature's Economic and Rural Development Committee in 2008 claimed that the mill had polluted local aquifers. Presently there is little to show that the area was once a community. 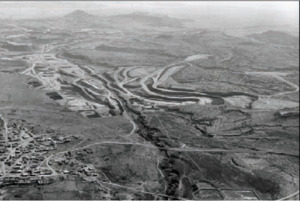 The Jackpile uranium mine opened in 1953 and operated until 1982. The Jackpile was one of the largest uranium mines ever developed and mined in the United States, and by far the largest mine in the Laguna uranium district. The ores of the Laguna district contain uranium, vanadium, and many other elements. Only rarely do the ores contain more than 1 % uranium or vanadium; most of the ores ·average about 0.2 % uranium and less vanadium. The first 3 million tons of ore shipped from the mine averaged 0.23 percent U3O8 and 0.13 percent V2O5 (1958 data). The ore bodies are typical "roll-front" deposits, localized in old stream channels. Carboniferous material within the ore zones is often high-grade. 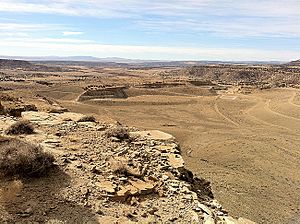 Reclaimed Jackpile-Paguate Uranium Mine, circa 2013

All content from Kiddle encyclopedia articles (including the article images and facts) can be freely used under Attribution-ShareAlike license, unless stated otherwise. Cite this article:
Anaconda, New Mexico Facts for Kids. Kiddle Encyclopedia.