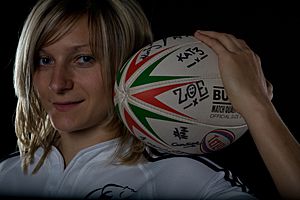 Anastasiya Khasyanovna Mukharyamova (born July 16, 1984) is a Russian rugby player. She was captain of the Russian women's national team, She was voted Russia's best rugby player in 2007, and 2013 European champion.

In 2005, she graduated from the Russian State University of Tourism and Service. She won the European Championship in 2013 and 2014. She played at the 2013 Rugby World Cup Sevens. In 2015, she retired.

All content from Kiddle encyclopedia articles (including the article images and facts) can be freely used under Attribution-ShareAlike license, unless stated otherwise. Cite this article:
Anastasiya Mukharyamova Facts for Kids. Kiddle Encyclopedia.