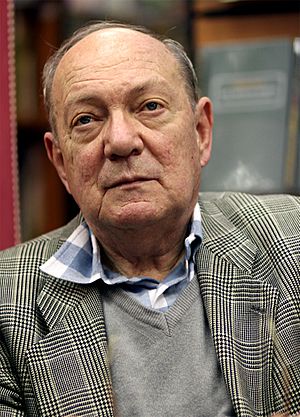 In the 1960s, he was one of the most famous young Russian authors. In Paris, Gladilin worked for the Radio Liberty and the Deutsche Welle. Among his published works in the West was a novel, FSSR: The French Soviet Socialist Republic — a tale of a Communist coup in France.

His other best known works were The Making and Unmaking of a Soviet Writer: My Story of the Young Prose of the Sixties and After, Moscow Racetrack: A Novel of Espionage at the Track and Rogues: Welcome to Paris!".

All content from Kiddle encyclopedia articles (including the article images and facts) can be freely used under Attribution-ShareAlike license, unless stated otherwise. Cite this article:
Anatoly Gladilin Facts for Kids. Kiddle Encyclopedia.