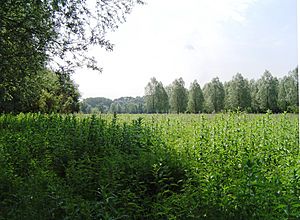 Andersey Island is a 273-acre (110.5 ha) area of flood-meadow and former flood-meadow south-east of Abingdon Bridge, Abingdon, Oxfordshire on the reach above Culham Lock in which parish it lies however maintaining close links with Abingdon by virtue of its current amenities. It is the second-largest island of the non-tidal course of the River Thames in England upstream of the Tideway — if disqualifying the villages of Dorney and Eton, Berkshire enclosed by the engineered Jubilee River. Andersey means Andrew's island after its chapel to St Andrew, demolished, built about 1050 CE.

The island is created by a natural anabranch (a corollary, specifically a meander cutoff) of the river, the Swift Ditch. Today it is a backwater and since at least the 1800s has been weir-controlled. It comprises 273 acres (1.10 km2) and is the fifth largest island of the river including the outer reaches of its estuary, discounting the area south of the Jubilee River, a channel opened in 2004.

The island was the site of a royal residence in Anglo-Saxon times, its ruins commonly called the "castell of the rhae" in the times of John Leland (antiquary) (d. 1552); the place was favoured by the royalty of Mercia and Wessex. Offa was the first to build a royal residence on Andersey Island and there his son king Ecgfrith of Mercia died in 796.

The destroyed palace of sorts was assumed by the Normans and used as a hunting lodge by William I and William II . The site was handed over to the Abbot of Abingdon in about 1100 and the buildings fell to ruin. The main Dorchester-Abingdon road runs through the island from east to west legally declared to have existed so as to claim public right of way from 'time immemorial'. It crosses into Andersey Island via Culham New Bridge, erected in 1928 by the Oxfordshire County Council. Until then, Culham Old Bridge, which lies slightly to the south was in use. The old bridge, now scheduled as an ancient monument, was part of a major scheme for improving links between Abingdon and Dorchester: between 1416 and 1422 the causeway across Andersey and bridges were erected by the Abingdon Guild of the Holy Cross.

Henry was persuaded by Queen Maud to return the island to Abingdon's ownership but not parish and to allow the abbot to use the lead from its houses for the roof of the abbey church. A late medieval chronicle indicates that the stone buildings on the island were already in decay.

An Oxford-Burcot Commission was established by Acts of 1605 and 1624 to improve the river between Oxford and Burcot. The commission did not make use of the mainstream western meander of the river via Abingdon; instead barges was directed along the backwater between Andersey and Culham Hill, known in early Tudor times as Purden's stream.

Most of the island is open land of grass, marsh reeds, poplars and willows. In man-made uses it contains a football club, a cricket club, a leisure facility, barns and cottages.

All content from Kiddle encyclopedia articles (including the article images and facts) can be freely used under Attribution-ShareAlike license, unless stated otherwise. Cite this article:
Andersey Island Facts for Kids. Kiddle Encyclopedia.