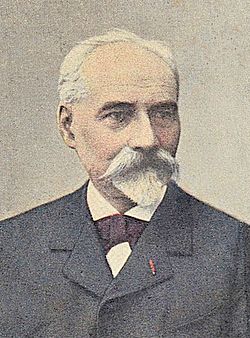 Theuriet studied law in Paris and became a civil servant. He retired as a civil servant in 1886, almost 20 years after his first published book was issued. The was the Chemin des bois, a collection of poems, many of which had already appeared in the Revue des Deux Mondes.

Theuriet received in 1890 the French: prix Vitet from the French Academy, and was made a member of the Academy in 1896.

An omelette of truffles & asparagus has been named after him.

All content from Kiddle encyclopedia articles (including the article images and facts) can be freely used under Attribution-ShareAlike license, unless stated otherwise. Cite this article:
André Theuriet Facts for Kids. Kiddle Encyclopedia.