Alma Andrea Meza Carmona (born 13 August 1994) is a Mexican engineer, model and beauty queen who was crowned Miss Universe 2020. Since winning the title, she became the third Mexican woman to be crowned Miss Universe. She had previously been crowned Mexicana Universal 2020 and Miss Mexico 2017 and placed as the first runner-up at Miss World 2017.

Meza was born on 13 August 1994 in Chihuahua City to parents Alma Carmona and Santiago Meza. She grew up in Chihuahua City as the eldest of three daughters, and is of partial Chinese ancestry. After completing secondary school, Meza enrolled in the Autonomous University of Chihuahua, where she studied software engineering. She graduated with her degree in 2017, and subsequently began working in Mexico as a software engineer in addition to her career as a model.

Meza began her pageantry career in 2016, after she was selected to represent Chihuahua at Miss World Mexico 2016. This was the first edition of the pageant after the Nuestra Belleza México competition lost its license for Miss World. In the pageant, Meza advanced to the top sixteen, then the top ten, and ultimately the top five. After reaching the top five, Meza was one of the two contestants awarded a crown, being crowned as Miss Mexico 2017. Ana Girault, representing Mexico City, was crowned Miss Mexico 2016 and given the opportunity to represent Mexico at Miss World 2016, while Meza was given the opportunity to represent Mexico at Miss World 2017. Also, Meza won the sports challenge at the competition. 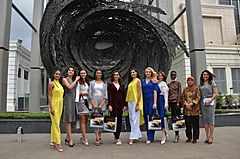 Meza (second from the left) with Miss World 2016 and 2017 Continental Queens visiting National Museum of Indonesia.

As the winner of Miss Mexico 2017, Meza represented Mexico at the 67th edition of Miss World 2017, held on 18 November 2017 at Sanya City Arena in Sanya, China. In the pre-pageant activities, Meza won group sixteen of the Head-to-Head Challenge, which gave her direct entry into the top forty. Additionally, she placed as the fourth runner-up in the talent competition.

During the finals of the competition, Meza advanced from the top forty into the top fifteen, top ten, and top five. After reaching the top five, Julia Morley announced Meza as the first runner-up behind the winner, Manushi Chhillar from India. In addition to her first runner-up finish, Meza was additionally crowned Miss World Americas, placing her within the 2017 Miss World Continental Queens of Beauty.

As Mexicana Universal, Meza represented Mexico at the Miss Universe 2020 pageant. The final of the competition was held on 16 May 2021 at the Seminole Hard Rock Hotel & Casino Hollywood in Hollywood, Florida, after being postponed from late 2020 to May 2021 due to the COVID-19 pandemic. Meza advanced from the initial pool of 74 contestants to the top 21, then the top ten, and finally the top five, where she was crowned the winner by the outgoing titleholder Zozibini Tunzi. Following her win, she became the third Mexican woman to win the crown, following Lupita Jones in 1991 and Ximena Navarrete in 2010.

In her capacity as Miss Universe, Meza has traveled to various cities within the United States and her home country of Mexico. After the Miss Universe Organization's announcement that the 2021 Miss Universe competition will take place in December 2021, Meza is set to become the winner with the shortest full reign (around 7 months).

All content from Kiddle encyclopedia articles (including the article images and facts) can be freely used under Attribution-ShareAlike license, unless stated otherwise. Cite this article:
Andrea Meza Facts for Kids. Kiddle Encyclopedia.