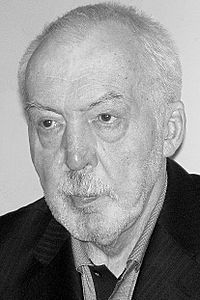 Andrei Georgiyevich Bitov (Russian: Андре́й Гео́ргиевич Би́тов, 27 May 1937 – 3 December 2018) was a Russian writer. He was born in Leningrad, Soviet Union. In 1988, he was one of the founders of the Russian PEN Club and was its President beginning in 1991. He also taught at the Maxim Gorky Literature Institute.

Bitov was known for his works Life in Windy Weather: Short Stories, A Captive of the Caucasus, Ten Short Stories, Pushkin House, The Monkey Link and The Symmetry Teacher. In 2018, he received the Order of Friendship.

All content from Kiddle encyclopedia articles (including the article images and facts) can be freely used under Attribution-ShareAlike license, unless stated otherwise. Cite this article:
Andrei Bitov Facts for Kids. Kiddle Encyclopedia.