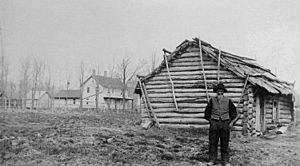 Andrew Peterson on the farm in 1885

Andrew Peterson (Anders Pettersson) was born October 20, 1818 at Västra Ryd parish in Ydre härad, Östergötland, Sweden. He died March 31, 1898 in Clearwater Lake, Carver County, Minnesota. He emigrated from Rydsnäs, Sweden to American in 1850. With his sister and fourteen other emigrants, they arrived in Boston on July 2, 1850. He arrived in Burlington, Iowa about four weeks later and lived there for four years. He later moved to Minnesota in 1855, claiming 160 acres (65 ha) near the southeastern shore of Lake Waconia.

He kept a series of daily diaries and ledgers dating from 1850 until a few days until his death in 1898. Peterson's diary was donated by his family to the Minnesota Historical Society in 1939. These writings provided inspiration for Vilhelm Moberg's novels The Emigrants, Unto a Good Land, The Settlers, and The Last Letter Home, although they were set in Chisago County, Minnesota.

While Andrew Peterson is not familiar to many Americans, his story is well known in Sweden. The Andrew Peterson Society was established in Sweden in 2003. In 2007 a tour group came from Sweden to visit the farm. The Carver County Historical Society restored the granary on the farmstead in 2006 with help from Swedish carpenters, and began restoration on the north barn in 2010. A musical called Andrew Peterson: The Genuine Pioneer Story had great success in Sweden in 2012.

This article incorporates text from MNopedia, which is licensed under the Creative Commons Attribution-ShareAlike 3.0 Unported License.

All content from Kiddle encyclopedia articles (including the article images and facts) can be freely used under Attribution-ShareAlike license, unless stated otherwise. Cite this article:
Andrew Peterson Farmstead Facts for Kids. Kiddle Encyclopedia.