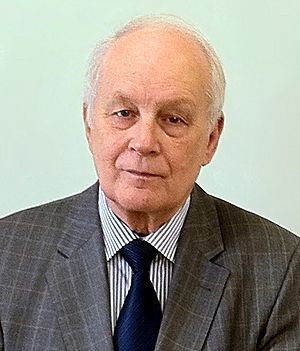 Andrey Nikolayevich Sakharov (Russian: Андрей Николаевич Сахаров; 2 June 1930 – 26 June 2019) was a Soviet-Russian historian. His best known works were the monographs The Diplomacy of Ancient Rus (1980) and its sequel, The Diplomacy of Svyatoslav (1982). He was a member of the Russian Academy of Sciences (1991). He was born in Kulebaki, then Soviet Union.

In 1993, Sakharov was appointed Director of the Russian History Institute, affiliated with the Academy of Sciences. He was an active member of the Presidential Commission of the Russian Federation to Counter Attempts to Falsify History to the Detriment of Russia's Interests between 2009 and 2012.

All content from Kiddle encyclopedia articles (including the article images and facts) can be freely used under Attribution-ShareAlike license, unless stated otherwise. Cite this article:
Andrey Nikolayevich Sakharov Facts for Kids. Kiddle Encyclopedia.